Along with his wife Donna McKenna and respected motorcycle drag racer Richard Gadson and backing from RPM Insurance Services, Haapalahti’s team is poised for its NHRA debut at the 47th Annual NHRA Summernationals at Raceway Park in Englishtown, N.J., June 9-12.

When it came time to select a rider, Haapalahti noticed a post on the Cycledrag.com Facebook page announcing Gadson’s availability.

“I got off the phone with Jack Korpela from Cycledrag.com and he wanted to try to help me find a ride and made the post on his own. At first I wanted him to take it down because I didn’t want it to look like I was begging,” Gadson said. “He told me, let’s leave it up, you never know who is reading. I’m sure glad we left it up because it turned into an amazing opportunity.”

“I know Richard is one of the top riders so I jumped on the opportunity to pair him up with the RPM Insurance Pro Stock Motorcycle,” Haapalahti said. “We hooked up immediately and our chemistry is great. We both see outside of the box and he is a super nice guy.”

Gadson said the connection with Haapalahti was instant

“What’s cool about Harri is he is still learning and when two people are both leaning together it makes for a great team,” Gadson said. “If somebody feels like they know it all already, you can’t tell them anything. It’s pretty cool to be with somebody who values my feedback.”

Gadson, nephew of legendary dragbike racer Rickey Gadson, and 15-year veteran of the sport calls this opportunity, “a dream come true.”  Gadson is a three-time champion in Pro Comp and Pro Mod. He considers winning Pro Street at the IDBL WPGC Bike Fest last season on Brad Mummert’s GS the biggest achievement of his career to date.

Englishtown will mark Gadson’s realization of a childhood dream and first race in Pro Stock Motorcycle.

“I have literally ridden nearly every style of dragbike from a 600 c.c. to a Pro Mod. Pro Stock has always been a goal of mine. I’m a normally aspirated guy,” Gadson said. “Power-adders make it too easy sometimes. I came from the 600 Super Sport world where you squeeze every little bit out of what you have.”

“He’s really diverse and his abilities as a mechanic and tuner are impressive,” Gadson said. “He has a lot of styles and experience under his belt. I think it’s really cool that he came from the Top Fuel Harley world. You don’t see many guys cross over from Top Fuel to Pro Stock.”

Haapalahti and McKenna bought a chassis from Blake Gann in the middle of February and have put in a constant flow of work, trying to update and improve the machine. 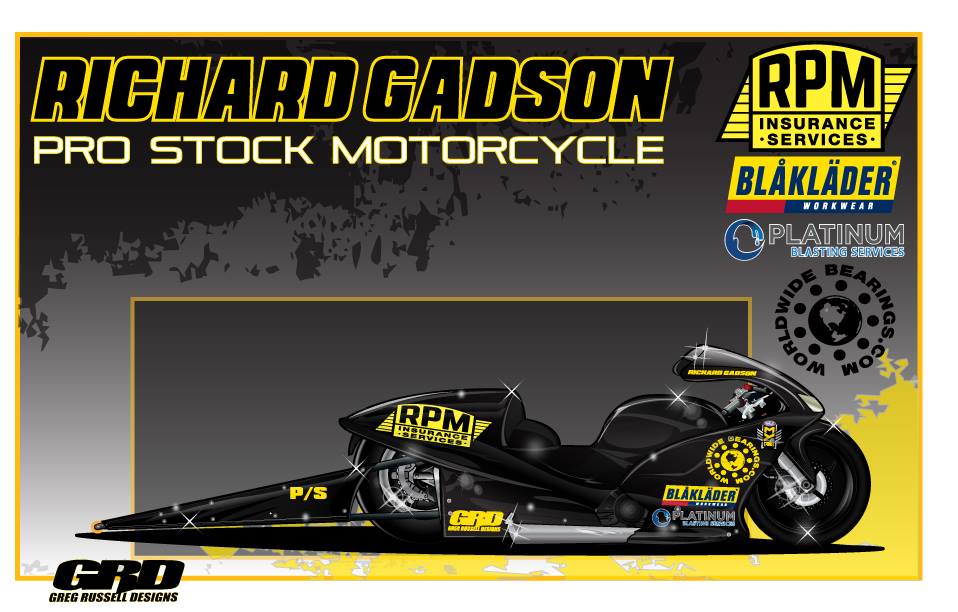 Haapalahti’s wife has been a big part of the build.

“The bike was built at our home in our one car garage with my role to be in a business suit by day and Harri’s greasy assistant by night,” said Mckenna, CEO of RPM Insurance Services. “As a self- funded family team we are focused on giving the fans a good showing and really feel our humble beginnings relate to the American dream. I believe strongly in my teammates and our no-frills approach to fan based entertainment.”

In an intimidating and expensive class long dominated by established and notable engine builders, Haapalahti is taking pride in embracing a form of grassroots drag racing. He will build his own engines out of his garage.

“Harri really wants to do this himself and I respect that,” Gadson said. “The easy thing to do would be buy an engine. He wants to learn for himself.”

With runs in the low-seven second range at the team’s recent test session at Silver Dollar Raceway in Reynolds, Ga., Haapalahti proved, although he may not have a multi-million speed shop, he is on the right path.

“I was pleased we ran some pretty decent numbers right away,” Gadson said. “Chip Ellis was there too and helped line us up and gave us a few pointers.”

“We learned a lot and there is a lot of room for improvement,” Haapalahti said.

The assembling, fabricating and innovating are what Haapalahti really loves about drag racing.

Even more grassroots, in a pit area filled with extravagant racing trailers, the team will run their team out of a van.

“We don’t have any fancy transportation equipment. Just my Dodge 2500 van,” Haapalahti said.

The final stop for the team before heading to the pomp and circumstance of the polished stage which is the NHRA, was a trip to drag racer Mac McAdams’ Classic Custom Coatings in Edgewater, Md. to make some repairs on the body and give the machine a fresh new finish.

“He saw potential in Richard and I so he wanted to help. The body was all cracked,” Haapalahti said. “Mac did a great job.”

“He did it so quick. He did it just a few days. I can’t thank him enough,” Gadson said. “Mac has always been a supporter of mine and helped me out. I really appreciate it.”

McAdams has a soft spot in his heart for dragbike racers in need.

“Derek Wisooker and I turned it around it four days,” McAdams said. “We are happy to be a part of what Harri and Richard are doing and we wish them lick.”

Haapalahti and Gadson are hoping to enter at least four races if the team’s budget allows.

“It’s exciting,” Gadson said. “If we can get sponsorship help the sky is the limit.”

The team thanked RPM Insurance for the continued support.