A New Era for Top Fuel Motorcycles About to Begin

Top Fuel motorcycles will have an active year in 2022, with a new look to the old class. The world’s most powerful motorcycles will begin a new season of competition with a three-race points season this year, sponsored by Pingel Enterprise. This championship racing season will be run in conjunction with the Mid-Western Drag Racing Series (MWDRS) and the action will kick off on April 22-24 at Memphis International Raceway.

The first event is the 35th Annual Memphis Chevy Show Presented by O’Reilly Auto Parts, is the premier destination for all things Chevrolet, featuring multiple classes of drag racing with cash prizes, automotive swap meets, a Chevrolet-focused performance marketplace, and the largest collection of Chevrolet vehicles in one place from classics to modern. With the recent sale of Memphis International Raceway, this may be the last race ever held at the famed track.

The MWDRS will be performing during this gala event, including the Top Fuel Motorcycles. This is a championship points race for the T/F bikes and all nitro-burning T/F motorcycles are welcome to participate. The MWDRS T/F class will be an 8 bike field and the purse will be the largest in recent history:

June 17-18 – MWDRS St. Louis, MO, this will be part of the St. Louis Speed Fest 2022. The Summer Speed Spectacular will bring all the drag racing action of the Mid-West Drag Racing Series, including the Pingel Top Fuel motorcycles, plus Elaine Larsen’s Jet Cars and Fireworks! 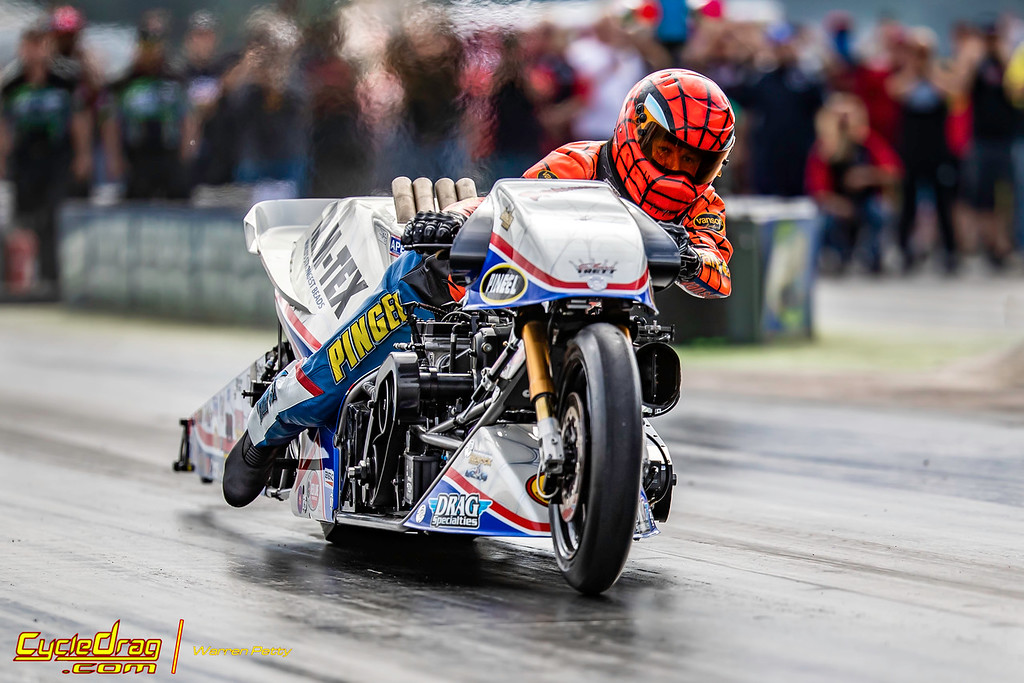 The three-race championship points season, sponsored by Pingel Enterprise is the cornerstone of the Top Fuel motorcycle drag racing season this year. The other events are equally important for both the Top Fuel bikes and for the promotional growth and history of the class.

Events like the Memphis Chevy Show, the Saint Louis Speed Fest 2022, the Eddyville Night of Fire, the Norwalk Night Under Fire, the Throw Down in T-Town: are all premiere car racing events where thousands of fans who normally never see Top Fuel motorcycles, will be exposed to their sensory overload.

Legends of Top Fuel motorcycle drag racing like Larry “Spiderman” McBride, Sam Wills, and Chris Hand, will again showcase the skills they have been honing since the 1970s. The new generation of Top Fuel racers like Dave Vantine, Mitch Brown, Micah Fenwick, and others will also be out there in front of thousands of race fans, signing autographs, shaking hands and making memories with a whole new generation of race fans.

Top Fuel Motorcycle would like to thank the people and companies that are supporting the class in 2022:

For More information on this year’s appearances by the Top Fuel bikes, to enter one of the events or become a sponsor and help support the Top Fuel Motorcycle class please contact Mitch Brown mitchb@sktc.net 316-640-5893