“This is the toughest bracket field—ever!” Dan Rudd said. The long-time racer and owner of Motorcycle Performance Specialties (MPS) was on his way to the Buy Back window on Saturday morning so he could take another licking. “Whoever wins this event has really accomplished something.”

So when NHDRO regular Chad Isley put BOTH of his entries into the MPS Pro ET final of NHDRO’s “Welcome to the Swamp” Season Opener at Gainesville Raceway on April 12-14, you could say the feat was otherworldly.

And there was Isley, who you might say beat the field TWICE on Saturday.

The Midwest reigned again in Sunday’s MPS Pro ET race. Iowan Steve Klemme’s .028 starting line advantage paved the way for his final round win over Floridian Gary Russell, who broke out with a 9.043 on his 9.06 dial trying to even it up. Klemme ran .003 over his 8.71 dial-in.

When you talk about Florida legends, Tony Mullen is right at the top of the list. Mullen’s Pro Ultra 4.60 winlight came on early when Broderick Jackson lit a -.010 redeye. “We’ve loved racing this event,” said Mullen. “The NHDRO people have made us feel so welcome. They really cater to the racer, and that’s what I am—a racer. I live a quarter mile from Bradenton Motorsports Park and that’s why I live there—to race against the toughest racers in the world.”

It wasn’t just Florida and Midwestern racers battling it out at Gainesville. Puerto Rico’s Ricardo Marte left the line a scant .002 quicker than opponent Cory Washington in the Hardcore Cycles Top Gas final. In a double breakout, hell-bent battle at the stripe, Marte took the win with an 8.17 to Washington’s 8.16.

But that wasn’t the best race of the day. Kentuckian John “Spooky” Markham and John King achieved that honor in the M2.Shocks Crazy Comp final. Markham’s .006 advantage at the tree was what won it for him, as the scoreboards lit up identical breakout 8.862s in the 8.89 class.

Also lighting up scoreboards was Millennium Trailers Pro Street racer Rodney Williford, hustling his turbocharged Suzuki Hayabusa down the perfectly prepped Gainesville 1320 in an attempt to be the first Pro Street racer to run a 6.50something. Round after round the internet was ablaze as Rodney sent it. The North Carolinian came as close to it as anyone in history, matching Frankie Stotz’s 6.601 and his own 226.70 mph record in the heat of the day. 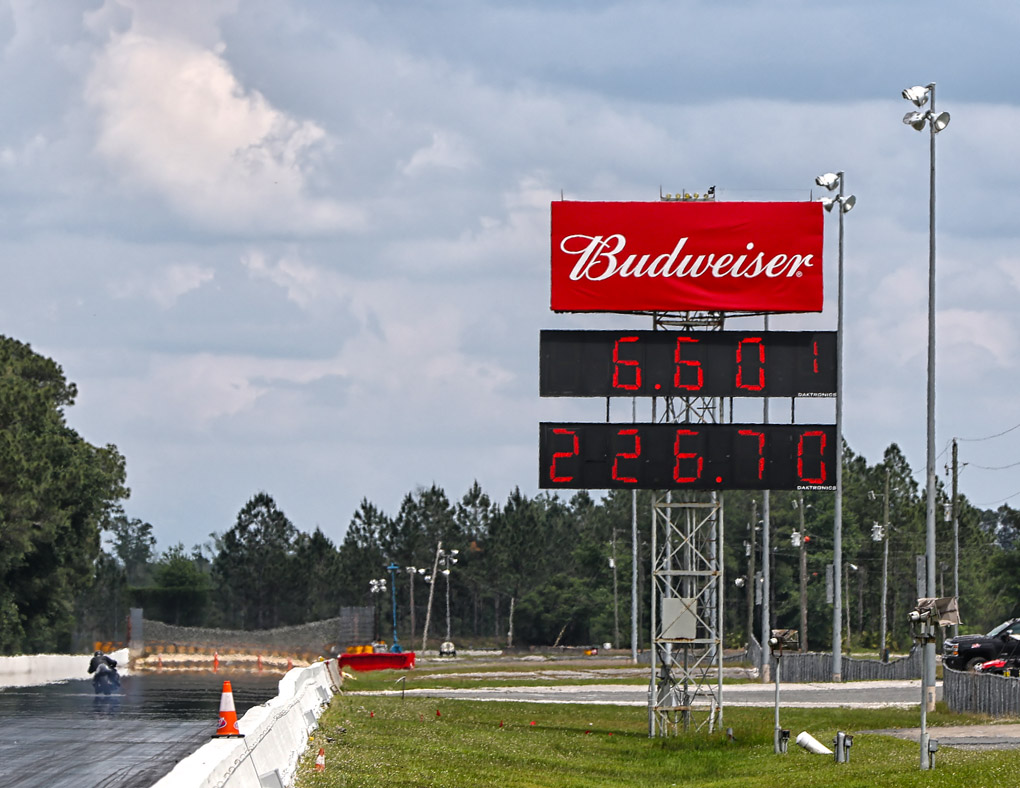 The final against Florida’s own Sydney Marshall was Williford’s last chance for the weekend, and although Rodney won the race he slowed to a 6.62 and came up just short of the record.

Class act that he is, Williford made it a point to personally thank NHRA’s Mike Walker, Gainesville Raceway’s Mike Yurick and Mike Poole, and every member of the waterbox and starting line staff for prepping a track capable of breaking records.

No records are kept in VooDoo Grudge, but John Fernandez’s “Money Train” looked as if it couldn’t have run any quicker. The Acme and MSP bikes were all hittin’ it and gettin’ it all day and night long.

Fernandez also had a dog in the QO Bikes Real Street hunt, with his brother Jason qualifying number one on a beastly, nitrous-huffing Kawasaki ZX14. Jason took the tree against final round opponent Steve Holmberg but his Kawasaki went off song in back half. Holmberg’s Johnny “Turbo” Dobrin-built turbo ‘Busa hummed along to NHDRO’s first Real Street win with a 7.85 at 188.73 mph.

Kentuckian Ron “Ju-Jitsu” Arnold and Barry Pryer Sr. left the line locked together with .008 lights in the Penske Racing Shocks Street Fighter final. Pryer goosed the throttle and looked to his left to gauge Arnold, then jumped back on the gas—but too much with a strong tailwind. Pryer’s 9.38 was way below the 9.50 index. Arnold ran 9.43 for the double breakout win.

NHDRO now heads north with the sun to their next race on May 17th at Dragway 41 in Morocco, Indiana, but look forward to welcoming some new Florida friends at Midwestern events. “The best part about this weekend has been the many new racers I’ve met down here,” said NHDRO’s Brian Welch. “So many great people and great competitors.” And more members of the NHDRO Family.