Dustin Lee, a motorcycle drag racer from Morristown, Tennessee, started off his 2017 racing season in a polar opposite from how he’s approaching the new 2018 season.

Here’s an example of that.

During 2017, this is how Dustin Lee launched his racing season on social media: “Excited that I am almost ready for 2017! First thing is first and I am gonna thank my awesome sponsors for what they do for me because without them I couldn’t do this, thanks to: DME Racing, Dunigan racing, MTC Engineering, Ray Mancini Xtreme motorsports, Chris Hill, Custom Cycle Corner and David Snapp, APE, Lee’s Cycle, PMR components, Schnitz Racing, World Wide Bearings, FBR shop, WPS and Shinko tires, Vanson Leathers, Penske Shocks, Montgomery Motorsports, Kenneth Schwartz law firm and DRAGBIKE.com. I am excited to get suited up and start 2017:
It’s almost SHOWTIME! 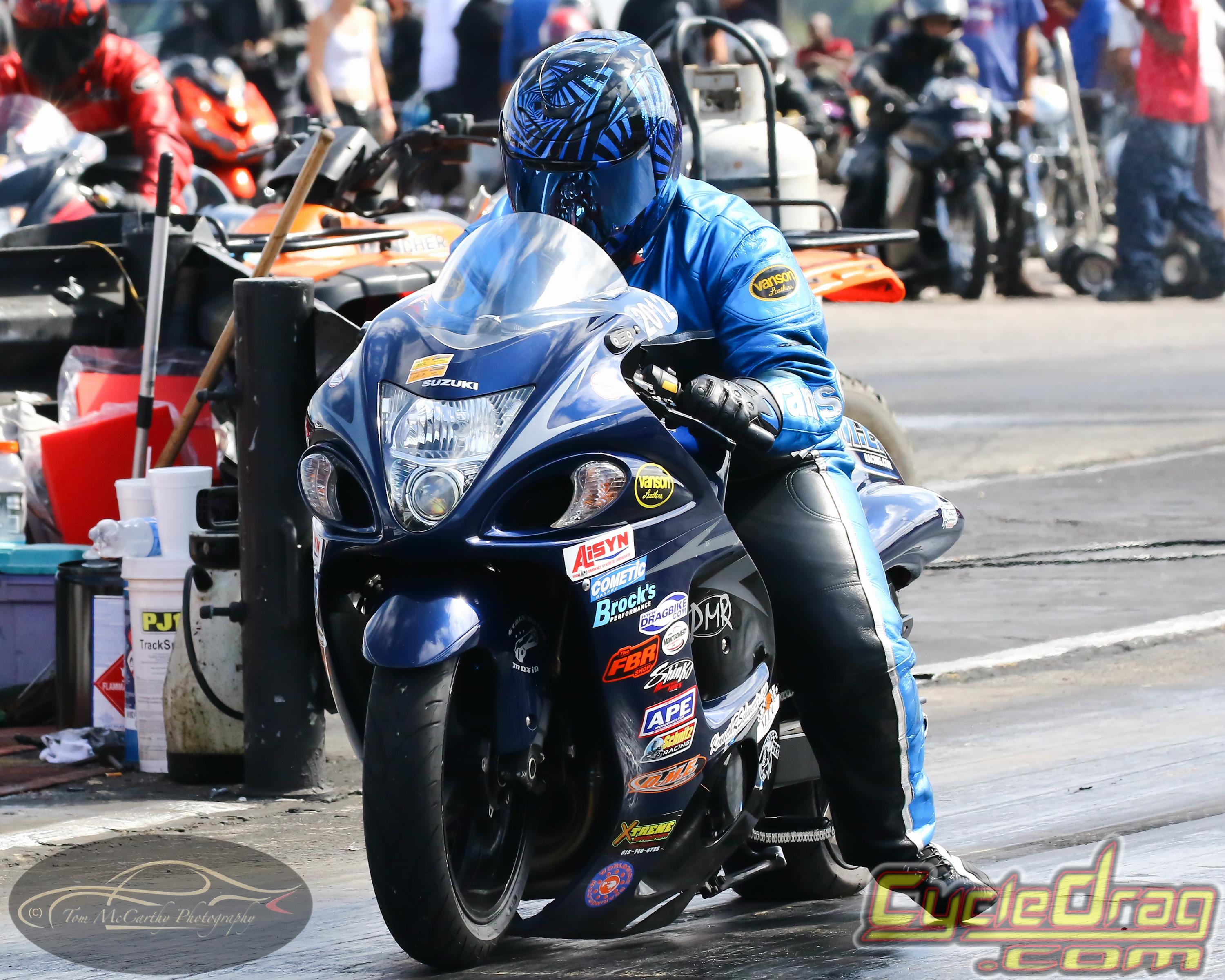 One year later its: “Now 2018 is about family, fun and enjoying racing. No more being forced totravel to races. It was a hell of a ride but I am retired from BAMF. I think I proved where I stand and my true friends are still behind me. I’m excited for the season and good luck to those that will chase the BAMF this year. I know what it takes and it’s not a task done with ease. It takes dedication, hard work, support and money! See y’all soon; I’m ready for a new challenge this year.” 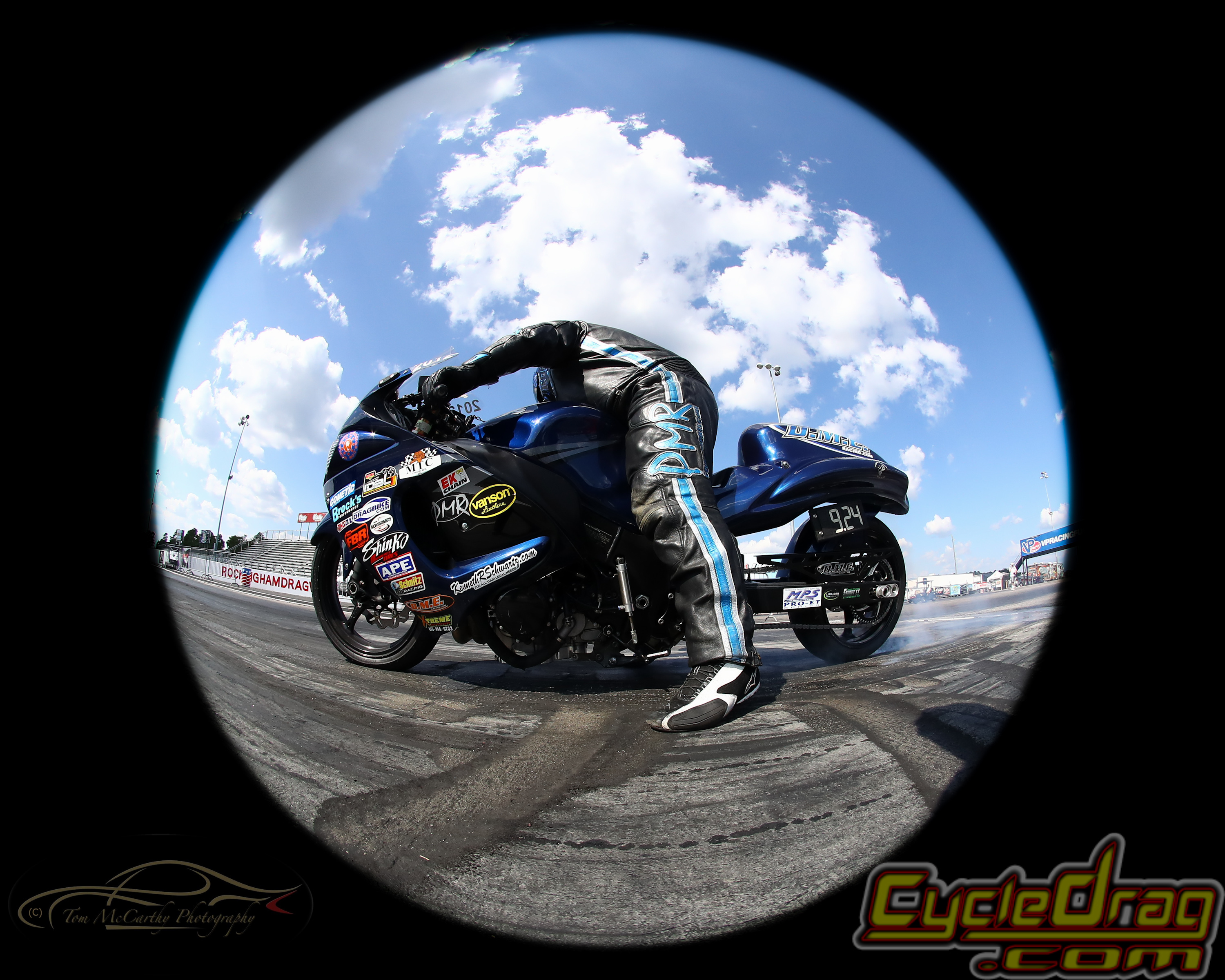 So why the 180 degree turn around from the most successful, prolific sportsman motorcycle drag racer in competition today?

“I want 2018 to be about family and fun while racing again. This has been hard on me and I’ve even lost friends while chasing the championships. It seems
my success has thinned out my friends a lot and I hate that.” He commented further, “It’s bittersweet for me, but it’s time to slow it down a bit.” 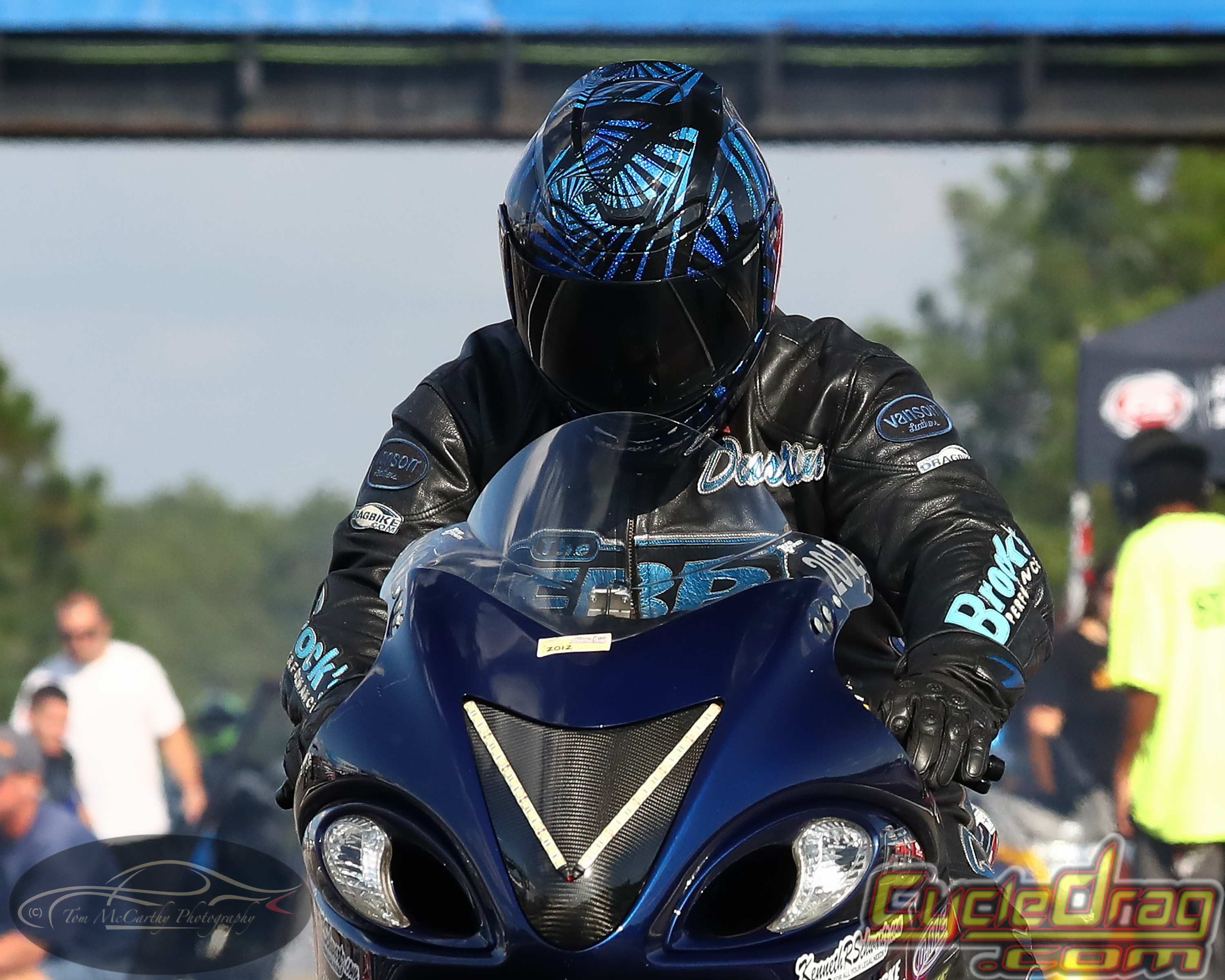 There is no denying how busy Dustin Lee has been in the past few years and how successful he’s been. Dustin has long been a successful Sportsman motorcycle drag racer, but he turned it up in 2015 when the BAMF title was initiated in 2014. In reality, his quest to prove he was the best started right then and there.

Dragbike.com’s Brandi Neithamer, with help from Ben Knight dreamed up and initiated a contest, based on gaining points by winning races and or championships, with various tracks and sanctions – these wins would accrue “BAMF points” and at season’s end the racer with the most BAMF points would be crowned the Dragbike.com Bad Ass Mo Fo, for that competition season. 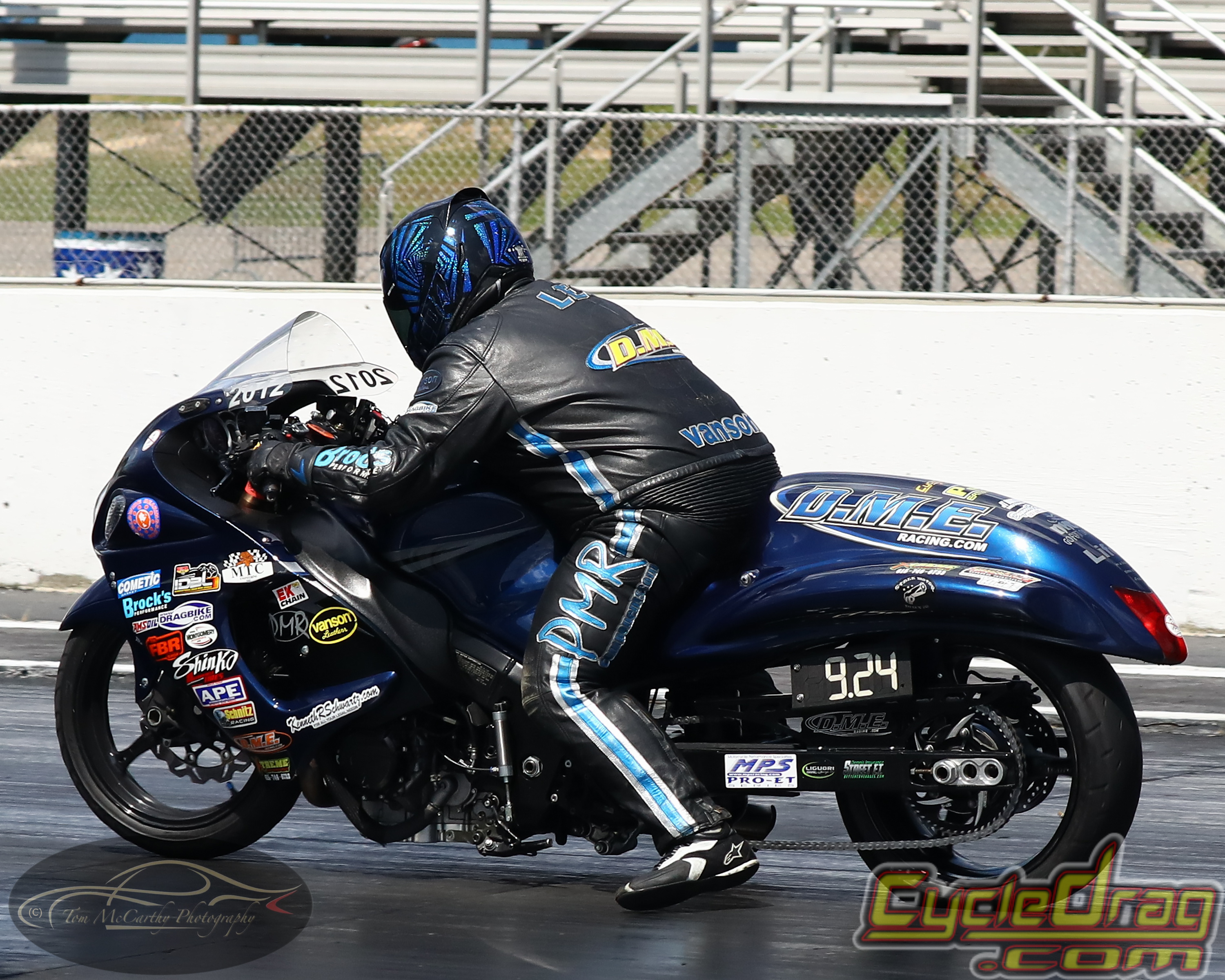 After all, if a sportsman racer takes the effort, time and commitment to race in multiple sanctions and at various tracks, in one season and wins races/championships along the way, that truly is a bad ass competitor. Not everyone can do this, in fact only a select few could even afford to take a swing at such a venture.

In 2014 Jeremy Teasley was crowned the first BAMF and in seeing this Dustin Lee began to apply himself fully. Starting at the beginning of the 2015 season, Dustin went on a three year frontal assault on the Sportsman motorcycle drag racing community. His three year resume looks like this: 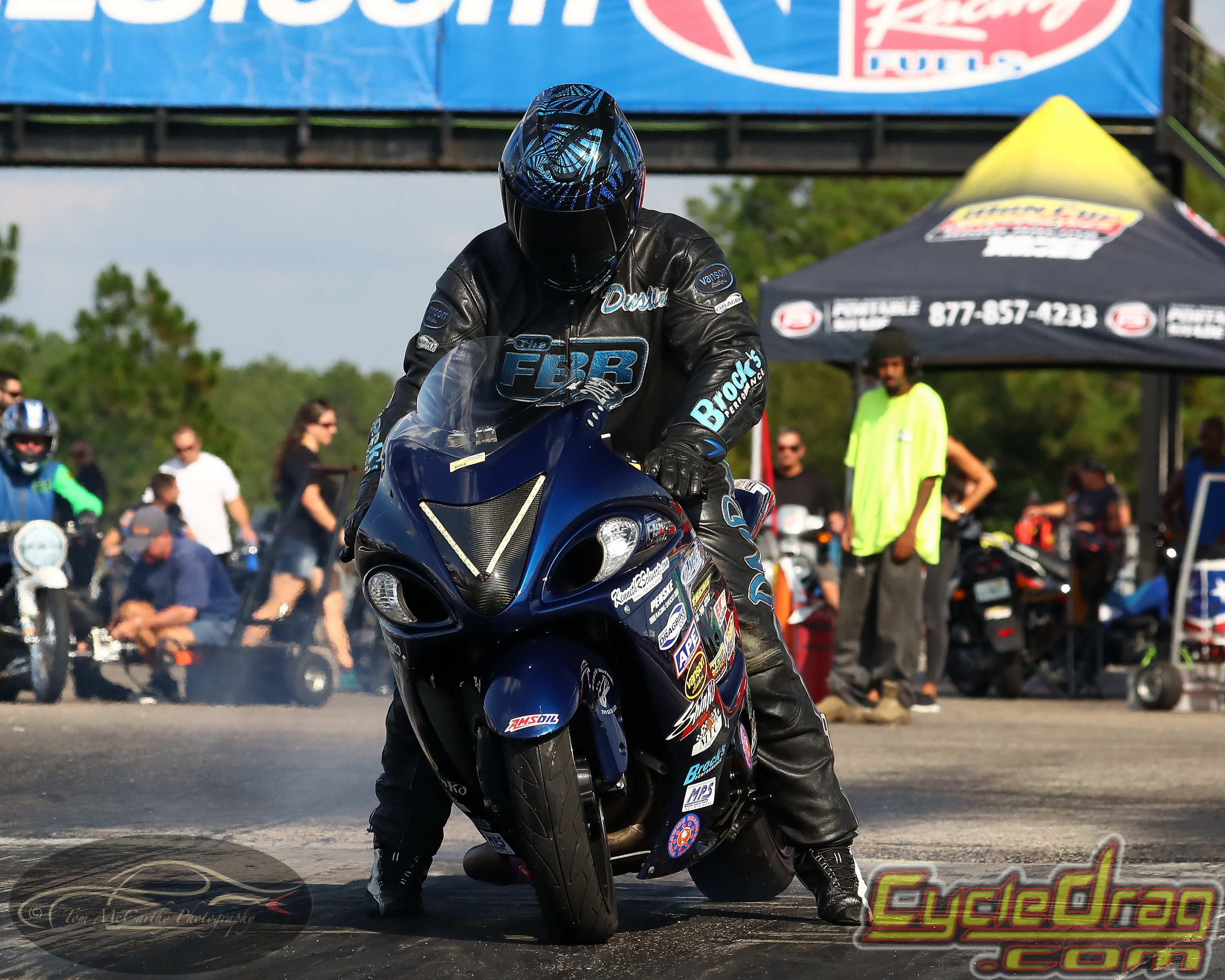 So to encapsulate; in the past three years, Dustin has accumulated well over a dozen national event series titles, won multiple specialty events, and done so while racing in no less than three different sanctions of motorcycle drag racing. Now in 2018, he’s ready to slow up the pace and after three consecutive BAMF titles, he’s ready to relinquish the title to someone else in 2018.

“I feel I’ve proved my point. Now it’s time to get back to basics and enjoy family and friends again.”

Dustin’s daughter, Harper, was born just three years ago and he’s spent the bulk of his
time on the road, but no-more of that pace for Dustin, “I’m trying to strike a balance this year, and not spend a lot of time on the road. It’s been great fun but my little girl is gonna grow up without me and I can’t let that happen.”

So his new plan is for 2018 to race only the XDA and NHDRO sanctions, maybe a few close to home events, but most of all, cut-back on the long road trips.
“I want to enjoy my family and friends more this year.”

Dustin Lee has found his way into the winner’s circle many times, now he wants to win at being a good dad and good friend to the friends he has remaining in his inner circle.

He’s won the BAMF title three consecutive times in the four years the title has existed. It will be a long time, if ever, that someone could challenge that. And even if they did, Dustin Lee is a BAMF for life.