The trip out West has already been a good one for defending Pro Stock Motorcycle world champion Matt Smith, who blistered the track record book in Denver en route to a win last weekend.

But now the five-time world champ has the chance to make it a great two-race span at his sponsor’s race, this weekend’s 34th annual Denso NHRA Sonoma Nationals at scenic Sonoma Raceway. With the NHRA Camping World Drag Racing Series Countdown to the Championship just two races away from this weekend, Smith’s third victory of the season on his Denso Auto Parts motorcycle would go a long way in positioning himself well for the playoffs.
He was impressive on the Buell in Denver, shattering track records and picking up back-to-back wins at the facility, but Smith has also won on his Suzuki earlier this year. Now he’s looking for his first Sonoma victory since 2007 and no matter what bike he chooses, as long as he or his wife, Angie, picks up the win at the Denso-sponsored event, that’s all that matters in his mind.
“We might run the Suzuki on Friday and if we’re not happy with it, maybe we’ll pull (the Buell) out for Saturday,” Smith said after his Denver victory. “I’m not sure yet, but I want to run the Suzuki. The Suzuki seems to have more of an advantage at sea level. But I want to do what’s best for my sponsor. I want Angie or myself to win the race at Sonoma. You always want to win your sponsor’s race, so it would be great if Angie or myself could get it done this weekend.”
Steve Torrence (Top Fuel), Robert Hight (Funny Car), Aaron Stanfield (Pro Stock) and Karen Stoffer (Pro Stock Motorcycle) won the 2021 event, and this year’s race will be broadcast on both the FOX broadcast network and Fox Sports 1 (FS1), including live eliminations coverage starting at 4 p.m. ET on Sunday, July 24 on FOX. It is the eighth of 15 events during the Pro Stock Motorcycle season, officially starting the second half of the season in the class. It’s a year where Smith has come on strong after some early struggles and he’s eager to keep rolling.
He won in Virginia on the Suzuki, defeating rival Steve Johnson in the final round and Johnson’s points lead has dwindled in recent races. Johnson now leads Angelle Sampey, who recently won in Norwalk, by just 10 points and the veteran has a slim 19-point advantage over Smith. Others to watch in Sonoma include defending event winner Karen Stoffer, who won at the season-opener in Gainesville, Denver runner-up Joey Gladstone, Eddie Krawiec, who has three wins in Sonoma, and Bristol winner Jerry Savoie.
But Smith is pleased with the progress he’s made on both bikes in recent weeks, taking great joy in the recent wins that have come his way. Doing so in Sonoma would also put a perfect capper on this two-race Western Swing in Pro Stock Motorcycle. 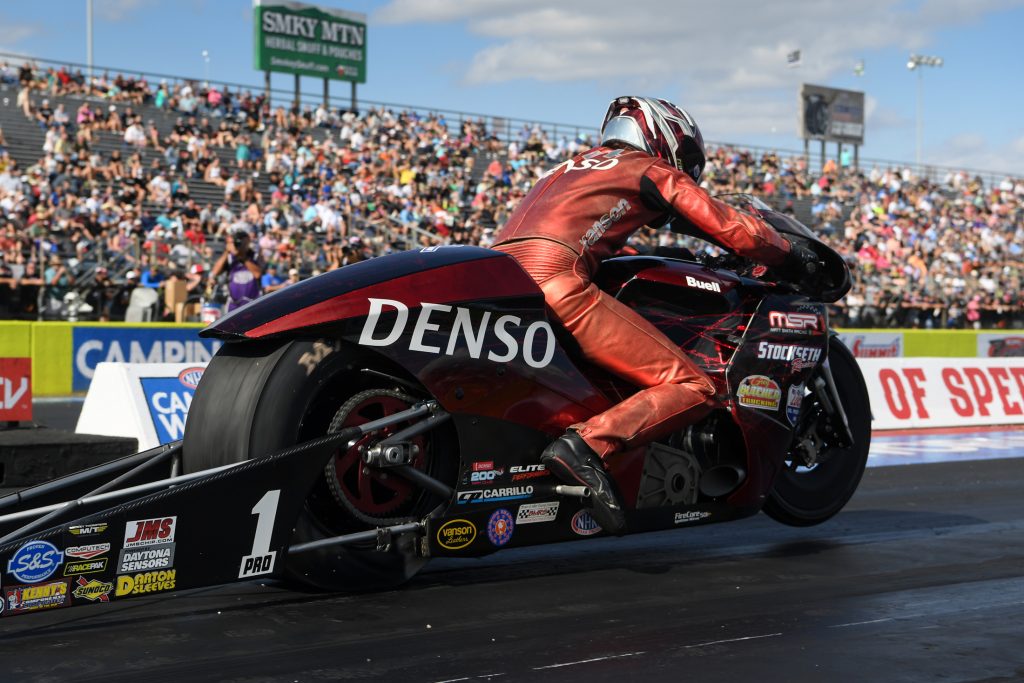 For autograph-seeking fans, they can attend an autograph session featuring riders in Pro Stock Motorcycle at the Suzuki Display at 4:30 p.m. on Friday, while an autograph session featuring Toyota drivers will take place at 10:30 a.m. on Saturday at the Toyota Display. A special Denso Cornhole Challenge and autograph session will take place at the Denso Display in the Fan Zone at 10 a.m. on Saturday, giving fans a unique interactive opportunity. On Saturday, fans can also attend Nitro School to learn more about how the cars operate and reach their thrilling speeds.
Race fans at Sonoma Raceway can enjoy the special pre-race ceremonies that introduce and celebrate each of the drivers racing for the prestigious Wally on Sunday and includes the fan favorite SealMaster Track Walk. The final can’t-miss experience of any NHRA event is the winner’s circle celebration on Sunday after racing concludes, where fans are invited to congratulate the Denso NHRA Sonoma Nationals event winners.
As always, fans also get an exclusive pit pass to the most powerful and sensory-filled motorsports attraction on the planet in Sonoma. This unique opportunity gives fans a unique chance to see teams in action and service their hot rods between rounds, get autographs from their favorite NHRA drivers and more. Fans can also visit NHRA’s popular Nitro Alley and Manufacturers Midway, where sponsors and race vendors create an exciting atmosphere that includes interactive displays, simulated competitions, merchandise, food and fun for the entire family. The new Pep Boys midway display will include tire change challenges, oil change challenges, a slot car track and much more, adding even more excitement to the midway.
NHRA Camping World Drag Racing Series qualifying will feature one round at 6:30 p.m. PT on Friday, July 22 and the final two rounds of qualifying on Saturday, July 23 at 12:00 and 3:00 p.m. Final eliminations are scheduled for 10:30 a.m. PT on Sunday, July 24. Television coverage includes qualifying action on FS1 at 9:30 a.m. ET on Saturday, 1:30 p.m. on Sunday, and then eliminations on FOX at 4 p.m. ET Sunday.

Two out of Three ain’t bad for NHDRO at Edgewater